After returning to higher education at the age of 30, Vonnie has spent the last seven years passionately advocating for an education system which works for all, with a specific focus on widening access.

After campaigning for – and securing – an overhaul of the student support process, Vonnie was elected as president of the National Union of Students in Scotland.

In this capacity, Vonnie secured the review of student support and influenced the review to recommend bursaries for care experienced learners, and was a Commissioner on Dame Ruth Silver’s Commission on Widening Access.

Growing up, Vonnie spent time in kinship care with her grandparents before entering the homeless system at the age of 16. With a low tolerance threshold for injustice, and a values set which is rooted in communities, Vonnie is a passionate advocate for equality and human rights.

Originally from California, Nancy has been in the UK since 1989 and is Chief Executive of Families Outside, the only national Scottish charity working solely on behalf of families affected by imprisonment, since 2008.

Nancy was awarded an OBE in the 2016 New Year’s Honours List for services to Education and Human Rights. 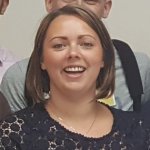 A big thank you to Ashley Cameron who took on the co-chair role for the Justice and Care work group beside Nancy Loucks during the early part of the Journey stage.

Discover the latest updates from the Justice and Care work group

Updates from the Independent Care Review on social media

Get social with the Review